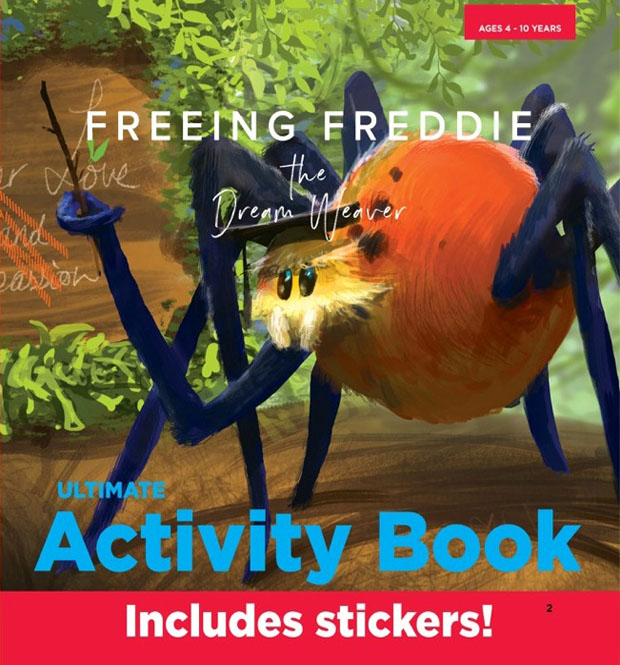 Freeing Freddie – The Dream Weaver Ultimate Activity Book – is a fun-filled book with activities for children of all ages. This special activity book contains practical tools to support children in dealing with their fears and shows them how best to build magical dreams.

Baking, puzzles, and crafts; colouring-in and stickers are all included. Although this activity book is a companion to the Freeing Freddie – The Dream Weaver reader, it can also be enjoyed alone.

A Freeing Freddie reader and workbook are also available.

Brett Feinberg was born in 1990 in South Africa. He is a healer and practitioner in consciousness-based health care. He has his triple Reiki Masters, is a Lightarian and Bodytalk practitioner and a qualified yoga teacher. Brent is passionate about empowering children and youth in order for them to live healthy fulfilled lives. He is a gentle soul who is driven to make a positive change in the world.

Kim Normand Feinberg has been in the non-profit world for the past 25 years. She has been a part of many successful ventures and organisations. She is known for her passion and love for children, education and Human Rights and the belief of accessing and developing potential.

She represents Survivors of the Shoah Visual History Institute formed by Steven Spielberg in South Africa; is the founding director of the Apartheid Museum; sat on the Human Rights Commission for Education and is founder/CEO of Tolerance Foundation, which teaches over 70,000 children life skills based on history, i.e. apartheid, the Holocaust, Rwanda and Kosovo. Kim is an Ashoka Fellow and has studied at the Harvard Kennedy School of International Studies and is the founder/CEO of Tomorrow Trust, a nonprofit organisation that supports orphans and vulnerable children and youth with education to release them from the cycle of poverty.

She is the author of three bestsellers in South Africa: Tomorrow; A Mother’s Legacy, and Raising Wisdom.

Her awards include: runner-up for the South Arican Social Entrepreneur of the Year Award, 2009; Lifetime honorary member of Golden Key; winner of the Most Influential Women in Business and Government (Welfare Sector), 2009/2010; awarded and acknowledged by the State of California Legislature for exceptional work done in uplifting children and youth, 2012; winner of the Exemplary Women Leadership Award, 2013, and winner of the Global CSR Excellence and Leadership Award, 2014.

Daniel Clarke is a South African-born artist who is self-taught in many modalities. He is an animator illustrator who works on large canvases.

ABOUT THE TOMORROW TRUST

Freeing Freddie, the reader, workbook and activity book were written to raise awareness and funding for the Tomorrow Trust.

The Tomorrow Trust is a South African organisation that, through education, is dedicated to the social development and upliftment of orphaned and vulnerable children who have no chance of realising their dreams. The Trust educates children from age 5: pre-school through university. The truth of e.e. Cummings’s proposition that children just need someone to believe in them is the founding belief of the Tomorrow Trust. That belief, working off of a successful model, has created university graduates from even severely disadvantaged children and has created success stories and active, responsible South African citizens.

Twenty per cent of the nett receipt of sales of this workbook will go to children’s education.